History of the Internet

The history of the Internet is a story of contributions by men and women such as J.C.R. Linklider, Leonard Kleinrock, Vint Cerf, Elizabeth (Jake) Feinler, Tim Berners-Lee, Bob Kahn, and so many others. It’s also the story of previously (and perhaps hereafter) unknown collaborations between government agencies, academia, and corporations. Most importantly, it’s the story about the creation of the most impactful technological advance the world has known to date, and the genesis of all technological advancements that will follow in its wake.

The Beginning of Network Communication

The story of the Internet begins in 1958. President Dwight D. Eisenhower created the Defense Advanced Research Projects Agency, or DARPA, to develop technologies in response to the Soviet launching of Sputnik. After research into space and rocket technology was transferred to the newly created National Aeronautics and Space Administration (NASA), computer research became a priority of DARPA. It was then that J.C.R. Linklider, head of the computer research program at DARPA, realized the possibility and importance of creating a network that allowed computers to share information between government agencies. This led to the concept of a computer network, to be called ARPANET, in 1967.

The Importance of Interface Message Processors for Network Communication

A major step towards making a computer network feasible involved breaking data into small blocks, or packets, and transmitting the packets over digital networks and reassembling the data upon arrival at the destination computer. Leonard Kleinrock introduced this packet switching theory while he was at MIT in 1964, and research on the theory continued at MIT, the RAND Corporation, and NPL throughout the mid-1960s.

In 1968, DARPA issued an RFQ to create packet switches, which the agency called Interface Message Processors (IMPs). The contract was awarded to Bolt, Beranek and Newman (BBN), an American research and development company based in Massachusetts. BBN created a team that included Bob Kahn of BBN, Lawrence Roberts of MIT, Howard Frank and others at Network Analysis Corporation, and Kleinrock (now at UCLA) and his team at UCLA’s Samueli School of Engineering.

Once developed, the IMP allowed communication between nodes networks at Kleinrock’s Network Measurement Center at UCLA and the Network Information Center led by Elizabeth Feinler at Stanford University to the ARPANET. On October 29, 1969, the first ARPANET transmission was sent, although only the letters “LO” of “HELLO” went through before the system crashed. Regardless, it showed that computers could talk to each other over a network. By the end of 1969, two more host computers, at UC Santa Barbara and the University of Utah, were connected through ARPANET.

In 1972, Kahn gave the first public demonstration of the capabilities of ARPANET at the International Computer Communication Conference. Also in 1972, Ray Tomlinson of BBN wrote the first email send-and-read software to make communication between developers more efficient. For the first time, communication was not only conducted computer-to-computer, but also person-to person. This became the most widespread network application throughout the rest of the decade. Computer networks were poised to move from limited applications for sharing research between government agencies and universities into a means of communication to be accessed throughout society at large.

The next great development in the growth of computer networks sprung from the idea of multiple independent computer networks through “internetworking architecture”, that allowed network providers to have their own interface that could interwork with other network interfaces. Thus the single computer network of ARPANET gave way for the interconnected Internet that we know today.
This development was made possible by the creation of a new version of network protocols that could operate within the environment of an open-network architecture. Bob Kahn and Vint Cerf of Stanford University designed this protocol, dubbed Transmission Control Protocol/Internet Protocol (TCP/IP). Among the features of TCP/IP was the connection of networks through what would eventually be called gateways and routers. In addition, Kahn insisted that there be no global control of the protocols at the operations level.

Other key developments soon followed. These include the:

Thus the Internet became a general infrastructure that allowed for new applications to be developed and deployed by anyone on the planet who can create new software code and programs. 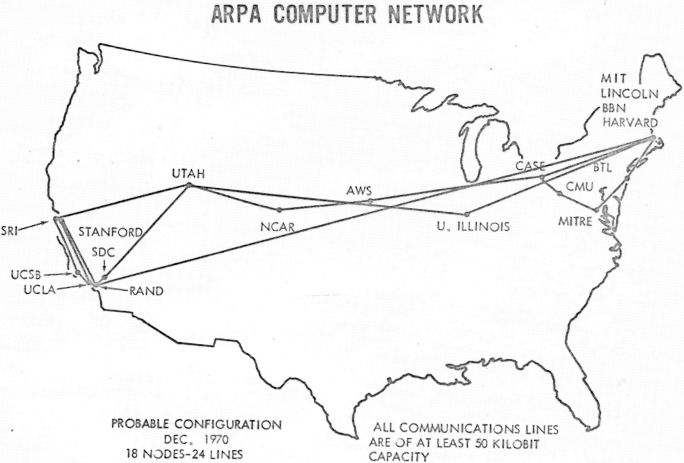 Map of ARPANET from December 1970. Courtesy of WikiCommons.